Its has been raining on and off for days now, but today the sun came out to play. And so did we.  And the sheep and their lambs. And the rest of the animals. 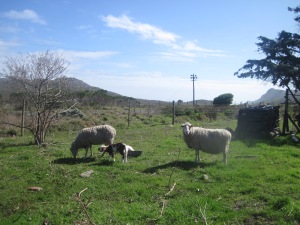 But we left them to sunbathe at the nursery and went to the beach instead. The waves were too messy and wild to surf so we just played in the waves and collected seaweed to be marinated for tomorrows salad. 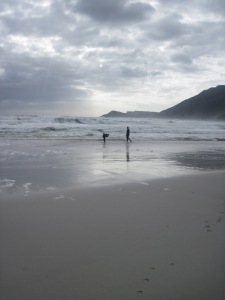 On the way home decided to see if any mushrooms had decided to pop their heads up for our supper. They had. You have to adjust your vision a bit and get your “mushroom spotting” eyes on as they are little tricksters, cleverly disguising themselves as old leaves under fallen pines needles, bushes and grasses. But once you spot one *like magic* you can see them appearing all over the place. I couldn’t find anything for ages though. Husband: “Look for suspicious little mounds of grass.” Boy child: : “I am EXCELLENT at finding them!” The confidence of 6 year olds should be bottled and sold for millions. Girl child did not say much as she is only just 1, but wanted to join in so shouted “Mama! Mama!” crossly at some pine cones she was foraging for in the puddle she was sitting in.

We found some slippery jacks and some pine rings 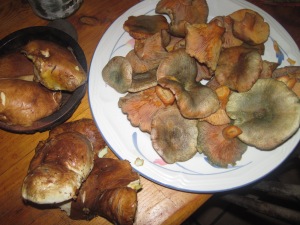 Which would go perfectly in a pasta sauce with some Trachyandra or Veldkool as it is commonly known, that we had foraged earlier in the day. Their tender flower buds are similar to young asparagus. 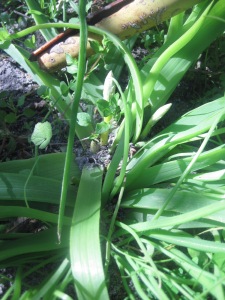 There is something uniquely special about eating local foraged wild foods, giving you the feeling of really being in touch with the season. Getting the exact vitamins and minerals your body is suppose to be receiving. Back to our roots. Back to basics. But in a really delicious sort of way.

One thought on “Wild mushroooms”

Foraged and harvested wild and grown ingredients on this weekends Fire and Feast Workshop 🔥🌿✨ . 📸 @daynisand 💕 . . . . . #slowfood #growfood #summertime #seasonalfood #veldandsea #foraging #harvest #farmlife #botanicals #wildherbs #firefood
Summer inspired banquet in the Glasshouse on yesterday’s Fire and Feast Workshop 🔥🌞✨ . . . . . . #veldandsea #slowfood #firefood #sustainableliving #wildfood #wildcraft #foodexperience #community #capetown #southafrica #natureinspired #seasonalfood
Yesterday we hosted our first Fire and Feast full day workshop and it was AMAZING! 🔥❤️✨ From 11am - 7pm our incredible group of participants spent the day learning about various fire cooking techniques, smoking methods, how to gain a flame from scratch and reconnecting to nature. We foraged and harvested kindling, tinder, wild and grown ingredients to make an array of beautiful fire cooked dishes over the flames we created from bow drill, hand drill, flint and steel. And the feast afterwards! Oh the feast 💕💫✨The long banquet table in the Glasshouse was heaving with the most sublime food: couscous cooked in kelp bulbs, locally speared fish wrapped in seaweed, stuffed with herbs and cooked over coals, farm veg, beetroot bread and wild garlic rolls baked in the wood fired oven, fire pit farm pork and veg parcel cooked for 6 hours in the earth oven, smokey slaw salad, smoked goats cheese and relish, locally brewed beer, kelp cocktails and for dessert: a smoked salted caramel coconut icecream with caramelized pineapple and watermelon. The workshop was facilitated by Veld and Sea dream team: . ❤️ @goldenwild_ movement + mindfulness . . 🧡 @so_guru wild teacher + decor . 💛 @thomasrossjones wild chef + baker . 💚 @matthew.dowling19 nature guide . 💙 Thomas Gray farmer + landscaper . 💜 Rein Buyze @earthskillsafrica . wildcraft nature guide . 💗 @creme_delagem wild chef + coordinator . 🤍@veldandsea forager + events . Next Fire and Feast Workshop takes place on 21 March, link in bio ✌🏽🌿✨ . #veldandsea #capetown #capetownevents #foodexperience #foraging #firefood #woodfire #survivalcraft #wildfood #community #selfsufficiency #slowfood #wildcraft #sustainableagriculture #foodgarden #natureinspired
Wild chef @creme_delagem foraging some kelp bulbs for our full day Fire and Feast workshop 🔥🌊✨ Watch out for our stories and feed tomorrow....things are going to get wild! . . . #wildfood #wildfoodlove #foraging #coastalforaging #kelp #eckloniamaxima #seaweed #freedive #veldandsea #wildchef #capetown #firefood
Snapshot from our Midsummers Night pop up dinner experience 🌻🕯🌞✨ The tastes, sights, smells, sounds and feels of an enchanting summer evening. 📷 @gabrielle.holmes 💕 . . . . . . . . . #wildfood #foraging #capetown #popup #popupdinner #boho #summertime #veldandsea #flowers #foodexperience #capetownevents #slowfood #growfood #seasonalfood #farmtofork
Join us this Wed the 22nd Jan at 7pm for the screening of local cult surf movie @deepbluemiddlec in support of getting Deepest South local Tom Gray and his kneeboarding team to New Zealand to compete in the 2020 World Championships! Venue: @camelrockrestaurant Tickets: R100 incl movie and a veg/meat burger. Drinks on sale at the bar. Ticket link and trailer: in my highlights FUNDRAISER. 🤙🏽Invite your friends, bring your granny, and show some gees in helping these kneelos get Down Under to REPRESENT SA! 🏆🌍🇳🇿💫 . Movie info: DEEP BLUE / MIDDLE C is a genre bending documentary film inspired by the west coast of South Africa . “For 10days&10nights we made a studio on the beach, in the Elands Bay dustbowl. From it our little community of surfers, artists, conservationists, musicians, chefs, mystics and foragers made music with our true selves. Exploring the greatest force on earth : we ate our fill from the wilderness.” One of the outcomes of the 10Days&10nights project is the film "Deep Blue \ Middle C" . . A film from an alternate reality - that is to be a surfer, living and breathing, on the west coast of South Africa. It is the place we go when we get dumped or loose a loved one or just need a re-fill of wilderness and the raw joy of life..to paddle out and find an acceptable perspective. To this sanctuary we make pilgrimages, to wash off the dirt of the world. This film is a homage to this gift we have been given. With themes of the ocean, spirit, biology, identity, and our natural place in the world, Deep Blue / Middle C is an interwoven story where fiction and non-fiction co-exist; as do memory and dreams. A wise man recently told me; "The qualities of the steps to getting somewhere are the same as the qualities of being there” . Dir: @publicshowsofaffection Producer: @suicidemonkey Dur: 54 min Fly On the Wall films 2017 . . #supportlocal #capetown #deepsouth #fundraiser #surf #kneeboarding #surfmovie #scarborough #coastalcommunity #westcoast #elandsbay #newzealand #worldchampionship #surfing